The presidential election in the United States of America has been a long hard slog so far, and we ain’t nowhere near the end yet. This truth is a particular problem if you happen to work for one of the major networks. “How”, the purveyors of infotainment seem to wonder, “can we keep this presidential campaign thing interesting, particularly when we’ve re-hashed all the usual human interest stories about babies plummeting from windows?” 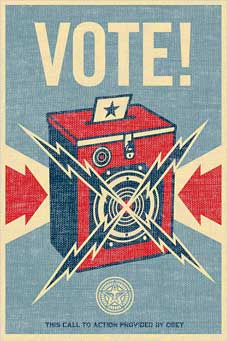 ABC, the network that only this week returned to writer-driven programing, solved this problem recently by casting a democratic national debate as one of the worst reality television shows ever conceived. Sadly, by the account of Tom Shales, columnist for the Washington Post, ABC’s George Stephanopoulos and Charlie Gibson gave “shoddy, despicable performances” as the debate hosts.

Admittedly, the problems for a TV network trying to one-up Survivor with the inherently boring TV debate format are readily apparent. After all, what do you get in a presidential debate? Some podiums? People dressed nicely answering questions about issues and ideas? Issues and ideas? You’re kidding, right? This is where ABC apparently thought “shoddy and despicable” could really work in favor of the network. In the blink of an eye, issues and ideas turned into lapel pins.

Really, ABC? It ought to be obvious that for reality television, you need props. You need carefully engineered physical challenges. You need colorful flags with tribe names printed on them that will be raised when puzzle pieces are put together. Or, you need people singing in a “pitchy” manner, say 42 cents sharp or flat, depending on the key or range. Plus, you need real reality hosts. They should be able to say things like, “immunity, back up for grabs” over and over again without any hint of irony. Typically, the hosts should “have issues,” not talk about them. Glassy-eyed hosts that may or not be on a lot of pain killer are also a viable option.

As for the presidential candidates themselves, they did not just bump off the turnip truck yesterday. Down to a person, they all know that exciting, dramatic things are more exciting than non-exciting non-dramatic things. Here, Obama is the lucky (and skilled and talented) one. Just take in one of his speeches. Hillary Clinton—no lightweight either—tries to think up something exciting about herself every day, and so out of the Hollywood-Back-Lot-of-Her-Mind comes sniper fire.

Yes, all the world’s become a reality show, and all the men and women merely one episode from being voted off. But as John McCain might put it, “Remember my friends and constituents, this “reality” is the Real Reality, and canceling the show is not an option. When voting in the race for those in the running towards becoming America’s Next Top Banana, remember to harness the awesome power of the american people’s brain.”