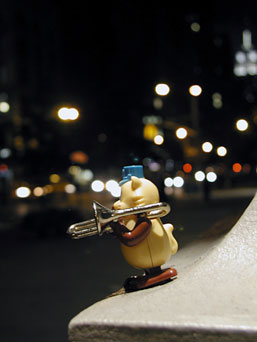 Ever since about 1995 or so, there’s been a Commander Trombone website. You’re looking at the latest version. As embarrassing as it is to admit today, the original version of Commander Trombone’s Jazz Site was published on GeoCities. (Before, I might add, that free web hosting site was bought up by Yahoo.) Yep, back in the day, there were lots of rainbow gif dividers on the web. There were huge html tables with big, ugly borders. Lynda Weiman was a voice crying in the wilderness.

Some people wonder about the origin of the whole idea of “Commander Trombone.” Here’s an explanation I wrote for an earlier version of the website:

A long time ago, back when the internet was a just a baby left at our front door by the defense department, Chris Wiley was working his way through music school at the University of Tennessee. It was the 1980s, and Mr. Wiley spent a reasonable amount of time doing advisable things he was supposed to be doing. He spent the rest of the time doing ill-advised things he wasn’t supposed to be doing. Fortunately, most of these things were legal, however they were still ill-advised. For example, Chris would sometimes make funny noises at concerts that featured music he didn’t like. Almost always, the noises were indistinguishable from the music anyway, so no one noticed. During his undergraduate years, Mr. Wiley was known for wearing an old wool shirt that his father had worn while in the service of his county during the Korean conflict. Later, during a school year in which Chris was living with his older brother, his mom bought him a strange looking vest to help fend off the cold. (The wool shirt was getting thin, and in the 80s, everyone was wearing these vests instead of coats. You’ve seen the movie Back To the Future with Michael J. Fox, right? He’s wearing a vest throughout most of that movie.) In any case, the vest ended up on Chris’ bed with a note from his brother saying, “Mom bought this vest at the Dr. Who – wardrobe closeout sale, its for you.” So Chris wore the gray vest with the strange zippered pockets, but he still wore the old wool shirt underneath. Walking around the campus with his trombone gig-bag slung over his shoulder, Mr. Wiley looked a little strange. In this Dr. Who get-up, Chris arrived home one evening after a strenuous practice session. His brother eyed him sarcastically and said, “Look, it’s Commander Trombone.” The rest, as they say, is history.