Today, the President of the United States will address children who attend secondary schools. Or, the POTUS will address children who attend public school if the local school bureaucrats allow him to. You see, the school bureaucrats are under a lot of pressure from “king-hell-crazy parents” who believe that President Obama is a socialist who has a secret plan to indoctrinate children. Don’t believe it? Just look at this copy from the president’s speech:

Yes, motivated kids are a threat to democracy and the cleanliness of the school’s restrooms. There is a solution to this problem, one that should assuage the concerns of “crazy parents” and school bureaucrats alike. 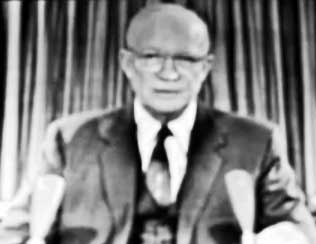 The real guy. Pay no attention.

Meet animatronic Eisenhower, or A-IKE. He’s a president from a simpler time, when you knew what to count on. The communists were pure evil. Cars had fins. Eisenhower fought in the Great War, and no one questioned his military record. Even better, he looks reassuringly like someone’s granddad, if your granddad happens to be balding and caucasian.

The best thing is this: the Animatronic Eisenhower can be programmed to say whatever you want him to say. So, if you want A-IKE to tell everybody when the audio-visual club meeting is, he’s at your service. Over the closed-circuit TV at your school, A-IKE looks surprisingly lifelike.**

** A-IKE, owing to his original design, may start talking about the National Interstate Highway System. This is clearly socialism. Shut A-IKE down if this occurs. Worse, A-IKE may, without prompting from you, begin to go on at length about something called the “Military Industrial Complex.” Again, shut down A-IKE down if this occurs. A-IKE is proudly made in the Peoples Republic of China.