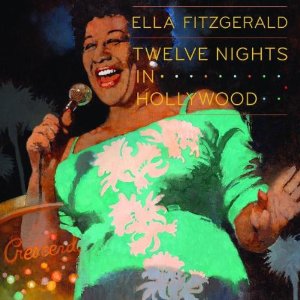 One year ago, the Ella Fitzgerald box set Twelve Nights in Hollywood

was in short supply. Part of the reason was an article in the New York Times discussing its release. Soon, the box set was backordered everywhere.

The newly discovered recordings were taken from Ella’s 1961 (and ‘62) stint at the Crescendo, a small jazz club in Los Angeles. These joyful, lovely, and intimate performances languished in Verve’s recording vaults for years, mostly because Ella’s producer Norman Granz was focussing on other projects the singer was doing at the time. Which projects? Well, two were the Rodgers & Hart

It won’t surprise anyone to hear that Ella is in fantastic form. On these recordings, she lines each tune up and knocks it out without seeming to try, with just a short and appreciative “I thank you” between each number. Ella covers her kaleidoscopic range: there are touching ballads, scatted swing numbers, and even the blues she wasn’t known for. Also, there’s a glimpse of Ella the entertainer, taking audience requests and being a little coy about whether or not she really knows the song, or whether there are in fact any lyrics to sing:

Someone, someone asked for Perdido …
Don’t know how the lyrics go
to this tune called Per-deeedo …

Well, you have to hear it.

is just as great as it was last year. Of course, it’ll be just that good in every year yet to come.