A book of solo transcriptions by Mike Medrick 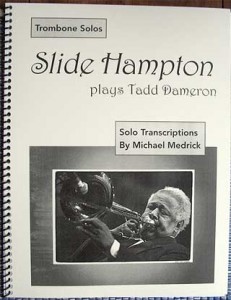 Mike Medrick’s book of Slide Hampton solos features Slide’s improvisations over the compositions of Tadd Dameron, including The Scene is Clean, Sid’s Delight (aka Tadd’s Delight), If You Could See Me Now, Lady Bird, The Squirrel, and Hot House.

Mad About Tadd, an album featuring Slide Hampton and the Heath Brothers, is the recording most of these solos come from. You can get Mad About Tadd on iTunes or at Amazon.

You can obtain a copy of Slide Hampton plays Tadd Dameron by emailing Mike directly. The book is $30; the price includes shipping costs.

As has been mentioned here before, in the 80s I was fortunate enough to attend The University of Tennessee for music school. It has to be admitted that my first university ensemble was the Pride of the Southland Marching Band. While that was a life-transforming experience, I was soon on to greener pastures in UT ensembles that were 1) more edifying, and 2) actually more fun. 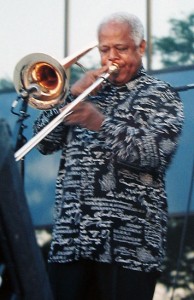 One of these ensembles was the UT Trombone Choir, which played in both the jazz and western-art-music traditions. It was directed by the trombone professor, Don Hough. Importantly, in the recent past previous to my joining the trombone choir, that ensemble had achieved a remarkable claim to fame by playing and performing with legendary jazz trombonist Slide Hampton. There was a cassette tape of the resulting UT Music Hall performance that was passed from trombonist hand to trombonist hand (no mp3s then, you ungrateful kids). On the basis of everyone’s experience with Slide’s visit, it was apparent that he 1) was pretty cool, 2) was also one of the most avid practicers in jazz, on the order of John Coltrane or Booker Little, 3) was a pretty amazing practitioner of the style of jazz referred to as “be-bop” on the slide trombone, 4) and had considerable skill as an arranger and orchestrator.

Mike Medrick, a soon-to-be trombonist chum who joined the Trombone Choir a short time later, also thought Slide was great. We’d often discuss jazz recordings. J.J.? As much as you could get your hands on. Slide on A Day in Copenhagen? A must-have. Mike was (and is) an avid arranger, and he soon was writing for both the trombone choir and UT jazz ensemble.

In the jazz program at UT run by Jerry Coker

(did I mention this? The jazz department was run by Jerry Coker!), we did solo transcriptions for Coker’s Jazz Styles and Analysis class. Through Jerry, it became clear to us (if it wasn’t already) that one of the best ways to learn the nuts and bolts of jazz music is to listen to, take note of, and study what has been performed by the great practitioners of the music.

Now, just like in Back to the Future, a fair amount of time has gone by, and quickly. But the great lessons and ideas are more like constants. Accordingly, my friend Mike Medrick is back from the future with a wonderful book filled with Slide Hampton solo transcriptions. If you are any sort of musically literate student of jazz — not necessarily a trombonist — this book is well worth investigating. (See the sidebar for how to get a copy.)