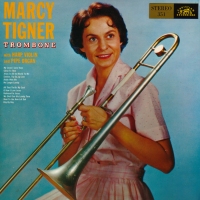 Although it may not be obvious to as many today, the history of music has long been tied up in the history of worship. Not to worry — the historical treatise needed to back that statement up won’t be pursued here. Suffice it to say that musical cross-pollination between the secular, the sacred, and the profane has been pretty common over the years, and the trombone has been of mighty good service to all three. Anyway, it’s possible that the sweet trombone style of Tommy Dorsey meets the sacred in Marcy Tigner’s Christian Faith trombone album from the 50s. How to describe the recording? The best thing for anyone to do is simply to listen. Whatever you think of the musical style, the trombone playing itself is fantastic.