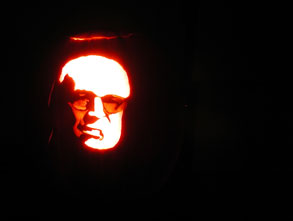 Halloween is unquestionably a big deal here in the USA. By “big deal,” I mean that this “spooky day” is reserved as an opportunity for certain commercial interests to sell lots of Halloween junk to the unsuspecting public. Halloween isn’t really scary. Selling junk isn’t scary—it’s the American Way, particularly when that junk is made in China.

During one of the 2004 vice presidential debates on television, John Edwards, then the democratic vice-presidential candidate, gave what I thought was a sound answer to a question. Although I confess I can’t remember the content of the question, what really stuck in my memory was Dick Cheney’s response: “There are so many inaccuracies [in John Edward’s answer] it’s hard to know where to begin.” 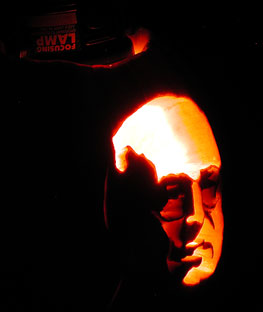 There are so many inaccuracies it’s hard to know where to begin.” As a debating tactic, it’s brilliant. Without really refuting any actual fact, you’ve refuted everything. The comment says, “No need to think further. Everything that man said is false.”

Today, you don’t need to think too hard to realize that the phrase “There are so many inaccuracies it’s hard to know where to begin” is fraught with lots of unintentional irony when applied to many of Mr. Cheney’s statements before, during, and after the 2004 election, particularly in regard to the war in Iraq.

Fear, though, is Mr. Cheney’s real stock and trade. It’s the kind of blind and unreasoning fear that says “We’ll get hit again” if the electorate elects the wrong politcian. On the other hand, it’s a “don’t-think-too-hard,” fear that has the cheap, plastic smell of a Halloween mask. Is it any wonder that Commander Trombone retrieves the vice president’s pumpkin likeness out of digital photo cold storage each year for Halloween?