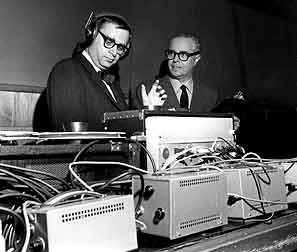 Wally Kerber and an associate

Today, there are lots of things we take for granted on the internet, but what’s hard for most people to imagine is that back “in the day” things were much different. Below, Wally Kerber remembers the early “fly by the seat of your pants” days of the early World Wide Web.

“Before the powerhouse website we know today as Commander Trombone existed, the internet itself was like an infant left on our collective front porches by the defense department. The defense department knocked and ran away. What did we do with that baby? We cooed at it. We tickled its nose. Fortunately for all of us, a little gentle patting on the back by Tim Berners Lee made that baby burp up the World Wide Web.

Those of us on the “early web,” as we like to call it, were horribly naive, but that naivete led to great creativity. If we needed sound effects, for example, we’d tell our sound man Jack to run a line down to the bathroom. There, he’d use the acoustics of the toilet. Slowly unscrewing the lid from a mason jar inside the bowl would simulate the sound of an alien spacecraft door opening. It frightened people, many of whom lived in New Jersey. We soon realized that the power of the web was truly awesome and we needed to treat that power with a great deal of respect. We treated the web as a public trust. We worked long hours. My lovely wife made us lots of frozen ginger ale salad to keep us going. We smoked lots of cigarettes; we didn’t know they were harmful!

How to view or “browse” the web was an ongoing concern. Several methods involved high voltages. An early “information helmet” or “thinking cap,” that beamed sounds and images directly into the brain proved unfeasible. To make matters worse, squirrels would find their way onto our makeshift power grid and electrocute themselves, blowing the whole system out. When we finally saw NTSA Mosaic, an early web browser, we were stunned by its simplicity, but nonplussed by its 256 nodes of color output.

It’s difficult to say exactly when everything on the web went south, but whatever it was, it was not the “web bubble.” Our team engineered the “web bubble.” It was good work. It cannot burst. It was our bubble, and we worked on it happily even though we never received a dime of royalties for it.

Perhaps trouble arrived in the form of a corporation called Microsoft. Bill Gates tried to convert the web to his own use in the dead of night when no one was looking. Even prior to that, Apple Computer tried to make things user friendly that shouldn’t be made user friendly. You don’t make a fighter jet user friendly, after all. We admired Apple though. We registered http://www.liveinthefuture.com and it still points to Apple Computer to this day. By the way, the iPod and podcasting are nothing new, we invented at least seven different internet broadcasting devices, one of which could broadcast on the 19 meter shortwave band in synchronicity with the internet.

Certainly the CSS fanboys, who came later, did not help in the progress of our innovations on the web. There was an army of them: Eric Myers, Jefferey Zeldman, Cameron Moll, Dan Cedarholm and we regarded them as drippy-nosed, self-congratulatory young upstarts who were trying to make a free wheeling web into a fascist mini state. Their ilk just wanted to make the Ruby On Rails run on time. Others, who also claimed to know it all, eventually made the web “scene,” but they could barely converse on a subject other than Chuck Norris.

As time went on, however, we who created the early web realized that change was inevitable and were forced to “get over it,” to use the parlance of our times. For those of us who were present at the creation, it’s certainly sufficient to look back on a solid record of accomplishment. The upstarts may not acknowledge—or even be aware of—how things were back in the summer of 1991 when we first rolled up our sleeves and pinned our hopes on the early web, but nevertheless, it is on the “shoulders” of our accomplishments that the web users of today now stand.”