Well, it’s been a while since there have been any posts here. To make matters worse, your’s truly has allowed most of Jazz Appreciation Month to pass without any jazz appreciation represented here. Thankfully, though, there’s still time. There’s always time. I think Albert Einstein said that.

For some (really) belated jazz appreciation, let’s go back to nearly the beginning of the previous century to a little thing called Livery Stable Blues, recorded by The Original Dixieland Jass Band for Victor in 1917. In these early days of “jass,” this sort of music was supposed to be somewhat comedic. The nascent recording industry used this idea of fun, novelty, and “jass” to “get over” with a popular market. In the case of Livery Stable Blues, this also meant — in part — a barnyard tie-in featuring musicians imitating animal sounds. Arguably, this constituted a disservice to both the animals and the humans. Other ODJB titles: Barnyard Blues, Ostrich Walk, Bow Wow Blues, and Skeleton Jangle.

Similarly constructed bands of this time played a music that musicians mostly identified as “ragtime,” and which didn’t need to be “funny.” The non-comic musical influence was coming from musicians like Joe “King” Oliver, whose band wouldn’t record for another six years.

Happy New Year to all those who came by this website in 2013, and even those who didn’t. Sorry Commander Trombone wasn’t updated more often. I’ll endeavor to do something about that this year. Maybe a nine part series on trombone slide lubrication? Or slide maintenance? It’s a simple process, really, but you’re going to need a belt sander and your own lathe . . . 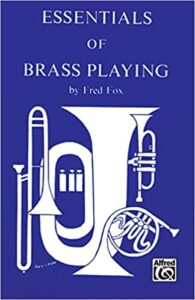 by Fred Fox. I like this book. Fox’s method might be summed up in his teaching slogan, “Eternal Vigilance.” He stresses that attention to details is what makes for excellent performance on a brass instrument, and likens mastery of these details to knowing a correct safe combination. Fox explains that the right way is the easiest way and eliminates the need for brute force (like blowing up the safe).

While there are few picture-illustrations in Essentials of Brass Playing, Fox uses his strong grasp of simile and metaphor to get his ideas across, and he uses his own descriptive names like “Accordion Effect,” “Hydraulic Effect,” or “Fourth Gear” to illustrate many of his concepts. When it comes to the production of brass sounds, these comparisons encourage the reader to think about cause and effect. Here, for example, is part of Fox’s discussion of the air column from early in the book:

Brass players usually believe, quite mistakenly, that they must literally blow the sounds out of the instrument. This is natural and very common misconception.

The purpose of the air is to pass between the tensed lips and make them vibrate. It is similar to a bow that passes across the string of a violin to make the string vibrate. True, more air is used to get a larger lip vibration, and thus play louder. In the same manner, more bow pressure is used on a string to produce a louder sound. But it should be observed that even when the violin sounds louder there is no rush of air past the strings. Similarly, with any other non-wind instrument, such as piano, tympani, or even loud speaker (which can reproduce recorded brass sounds), the rush of air is no factor in the volume of the speaker sounds.

Interestingly, Fox defines “diaphragm” in his own way:

For firm, full-bodied notes, whether played loud or soft, the upper diaphragm must remain under tension as long as a note or phrase is played …

While Fox isn’t incredibly explicit about forming an embouchure, these main points come through strongly throughout the text: