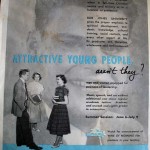 No posts since December? Er, Happy New Year? To get things rolling again, a trombone article from the April, 1955 issue of ETUDE magazine is discussed below. The history of The ETUDE magazine is recounted here. This particular issue featured the ad pictured in the inset on the back. Click for a larger version.

The April, 1955 issue of ETUDE music magazine featured the article, “Two Centuries of Trombones.” The title was a little deceptive: instead of covering everything about trombones over the course of two centuries, the piece focussed on how trombone playing was historically significant to the town of Bethlehem, PA. Specifically, the town trombone choir’s performances were used to mark events that were solemn, lighthearted, or . . . anything. Below are excerpts from this article that frustrated readers of this website — yearning for new content — may find edifying:

“Why trombones? It has been suggested that the somber tones of these slide instruments were in keeping with the idea of playing chorales to announce a death as well as providing music at a funeral. Add to that an all-weather instrument for outdoor playing (although the slides of the trombone will freeze in very severe winter cold), and you have a practical as well as an aesthetic reason for the use of the trombones.”

Remember, though, these trombonists were not buskers. In fact, in stark contrast to buskers, the trombonists could be mobilized immediately as defenders of the town, particularly around Christmastime. 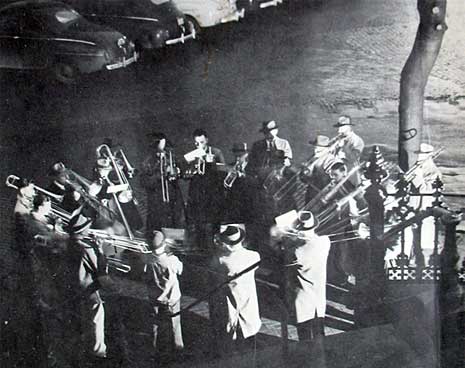 “A legend has grown up around the Christmas tromboning of that year [1755]. The story has long been accepted by many people that late Christmas Eve a war party of Indians camped across team Monacacy Creek, planning to attack the settlement as the sun rose. However, the trombonists from their rooftop position greeted the day before the Indians. The redmen, hearing sounds they could not understand, thought that it was the voice of the Great Spirit telling them to leave Bethlehem in peace.”

It’s likely that some sort of qualifier was needed there, like “may have thought it was the voice of the Great Spirit.” Or, a complete revision: “The native americans, hearing sounds they quickly identified as trombones, felt a little sorry for the pale-skins and decided that any sort of attack was simply not worth it.” Anyway, back to Christmas:

“Of course, at Christmas the trombone is not neglected. The Christmas eve love feast is opened with the playing of Hail Thou Wondrous Infant Stranger, and later the vigil services begin with the notes of Hark a Voice from Yonder Manger. These are old chorales. Either one or both may have been used in 1755. At that time it was the custom for the trombonists to announce Christmas day at dawn.” 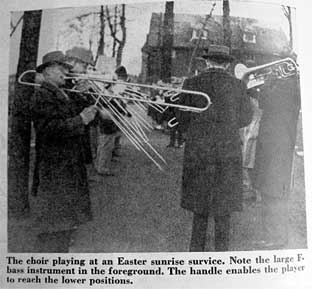 The majestic sounds of the trombone are both festive and appropriate for Christmastime, and likely met with the approval of the townsfolk (provided the intonation was halfway decent). The possible downside? It seems the musical encouragement meant the trombonists were always up and playing at the crack of dawn regardless of the time of year or holiday. Easter is next, and naturally that involves waking everybody up, too. But how? With a large F-Bass trombone with a handle that allows the player to reach the longer slide positions.

“Long before the congregation assembles in the church, from whence they proceed to the cemetery, trombonists pass through the community awakening the sleepers with the chorales announcing that The Lord has risen.”

By the time 4th of July rolled around, the town had the good sense to put the kibosh on the “up-early and always playing the trombone” thing:

“In the past it was even customary to herald the Fourth of July at daybreak, but this custom has been given up, either because folk living near the church liked to sleep on a holiday morning and objected to being disturbed at sunrise, or the trombonists themselves preferred Morpheus to Polyhymnia.”

Importantly, there can be no ETUDE trombone article without a funny little anecdote that involves the total disruption of a beleaguered trombonist’s embouchure. Here goes nothing:

“Stories are still told of how one player’s false teeth fell from the steeple to be shattered on the roof of Simon Rau’s drug store far below, but there is no record of a trombone ever having fallen to the same doom, although from time to time someone’s hat becomes a casualty.”

To conclude this ETUDE article, there’s a quote from Rufus A. Greider, who, 80 years previous to 1955, had written about the unwavering dedication of the Bethlehem trombonists.

“It requires not a little self-denial to serve as a performer of the trombone choir. He is required to attend all services when they are used. He is obliged to assist in announcing every death which occurs in the congregation, to play at the funerals, to play on every festival, morning and afternoon, to perform before the celebration of the Lord’s supper. He is duty-bound to go to the graveyard or climb in the church belfry at all seasons and in every kind of weather; cold or rain must not be heeded, he goes through it all.”

In other words, these guys should have unionized.

That’s one way you know an ETUDE article is over. There’s a big “THE END” at the article’s conclusion.

One thought on “Etude Magazine, April 1955: Two Centuries of Trombones”