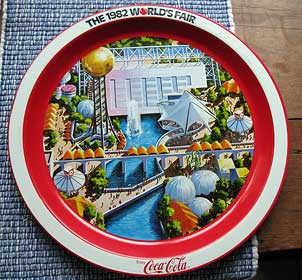 Yeah…well…you had to be there

In the Fall of 1981, I was a freshman at the University of Tennessee at Knoxville. It was an interesting time to be there, with the 1982 World’s Fair just about to break out in the city. Just look at the commemorative serving tray, pictured here. Yes, the future seemed within our collective grasp.

Anyway, fortunately for me, I had a band scholarship. Perhaps somewhat unfortunately, as a condition of that scholarship I was obliged to play in the University of Tennessee Pride of the Southland Marching Band.

There must have been some aspect of marching that I enjoyed, and maybe I thought that membership in the marching band provided a kind of continuity from high school. In retrospect especially, this notion is crazy. As a naive freshman, I was simply not prepared for the gargantuan priority shift that was occurring all around me. Inebriating liquids would play a huge role. On campus, the Pride of the Southland Marching Band was no exception to this college drinking trend, and probably was its true standard-bearer.

The marching style, too, was very different from what I was used to. In contrast to the wannabe-drum-and-bugle-corps style of high school, the “Pride of the Southland” style of marching was a military style, involving circles, diamonds and straight lines up and down the field. While the pre-game show — featuring Rocky Top — was relatively fixed in execution, each half-time show was freshly envisioned for each game. To accomplish these new marching drills, each band member was issued a printed chart telling him or her where and when to move. Negotiating the formations could be tricky.

Many of the marching drills were charted by the long-suffering assistant band director, Walter McDaniel. During rehearsals on the field, McDaniel did his best to be civil, but not surprisingly, the half-crazed-college-kid-marchers could drive him to a level of exasperation that would be difficult for any sane man to handle. On one occasion, in a conflicted fit he famously uttered, “Damn it…Please…Damn it…Please…” It became a band catchphrase.

Then there was the band’s leader, Dr. W.J. Julian, who was simultaneously reviled and loved by those in the band. Although Dr. Julian, then the president of the American Bandmaster’s Association, had his genteel moments in which he spoke about sipping cognac by the fire, he was on the other hand a man who truly understood what it meant to be hell-bent. Undoubtedly, part of the reason for W.J’s disposition was something that happened many years earlier: three years to the day after the attack on Pearl Harbor, the ship he was on as a young man — LSM318 — was sunk by a Kamikaze pilot in the Philippines.

During parts of a show, Julian would conduct atop a ladder on the sidelines. His conducting style was deliberate and jerky, and often seemed to be an expression of his own frustrations with trying to get the band to perform as he wanted. During show run-throughs, he’d take to the field, run through the formations, and deliver in-face, generally non-positive reviews of how you were doing. These displays were almost always issued with the true histrionic furor common to tyrants and some who try to motivate those in post-secondary education. A favorite gesture was one in which Dr. Julian, his angry, beet-red face already apparent, would rip off his sunglasses, revealing furious eyes. After a dramatic pause, there would come the smack-down utterance, the coup de gras. Once, when I made a misstep during rehearsal, Julian got up in my face, performed the glasses rip, and quietly growled in my ear, “You don’t know shit about this show.”

After rehearsals on field, the whole band would get their notes on how we did. Dr. Julian would ascend his ladder, Douglas-MacArthur-like. We’d all gather around. He’d look out at the horizon, the sun gleaming off of his aviator sunglasses. Eventually, he’d say, “That was better, but it was still horrible.” Expanding a bit further, he’d say, “Some of you…” — his voice would trail off, then — “MOST OF YOU! — are INSOLENT and COMPLACENT!”

On one occasion, the band was handed a reprieve from learning a new and complicated halftime show: a tribute to the United Way. The band would forego its usual repertoire of constantly moving circles and diamonds. Instead, we’d simply form the United Way symbol, face the press box, and play a touching song meant to pull at the heartstrings of the assembled fans.

When halftime arrived, everything seemed to go well. On a crisp and clear Fall day, the Pride of the Southland Marching Band formed the United Way symbol in the middle of the field. We were almost ready to play “You’ll Never Walk Alone.” First, though, the sound of the announcer’s voice boomed through the PA and slapped around the stadium in that bigger-than-life-college-football way:

“Ladies and Gentlemen!…The United Way!…Thanks to you it’s working!…Listen as the University of Tennessee Pride of the Southland band plays…You’ll Never Walk Again.”